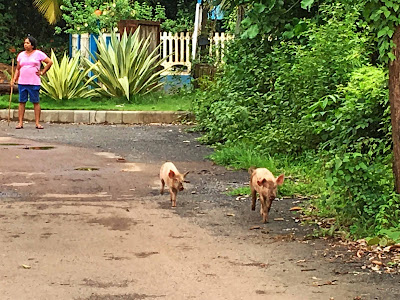 One day, I saw two tiny, fair-skinned piglets running ahead of my car and thought: ‘By god! They really can sprint. They’re super-fast!’ They scuttled into a by-lane and I turned into my apartment complex and forgot about them.
A couple of evenings later while returning home, I saw a woman walking her pigs. I stopped the car and approached them, wanting to take some photos. It was the stick in her hand and the way she was hovering in their vicinity that made me ask if the pigs belonged to her. Her name was Jennifer and I learned that she is a neighbour of mine. Lives in the same Wado or village. 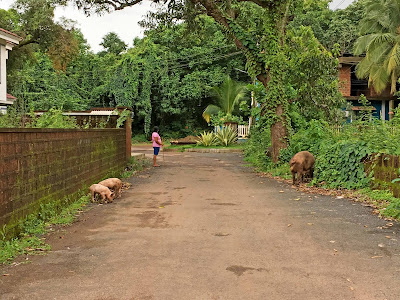 Jennifer’s affirmative answer led to a conversation about them. I asked if she reared them, if she had a pig farm. She said she just had these two pigs – one male and the other female. She added that the sow, which is three or four years old, and had given birth to seven piglets, two of whom were on the street as we spoke,  would soon be meat which she would sell. The male, their father, was not quite a year old and the piglets were just two months old. I asked if she named them. Very matter-of-factly, in the most deadpan manner I’d ever seen, she uttered, “No”. 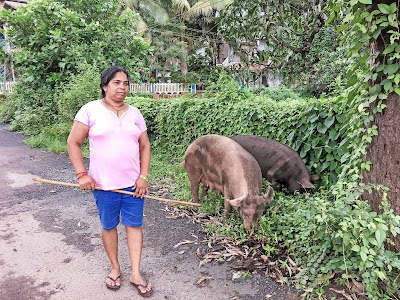 I have to admit that something turned in my stomach. I was now acquainted with this sow, with her drooping udders and hungry snorting, who would soon be inside Jennifer’s stomach and, who knows, even mine! The next time I have a hankering for bacon and eggs, I’ll be unable to eat, wanting to know whose pig it was, whether we have met or not. I was confused by the encounter and started probing my own food choices. But, taking my cue from Jennifer’s matter-of-factness, I clicked my photos and drove on home. 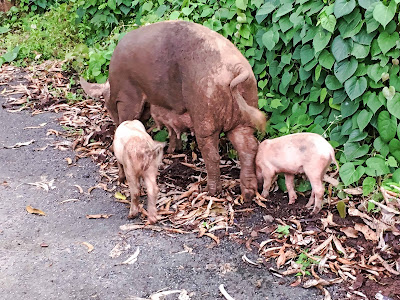 I didn’t have far to go, but it wasn’t a comfortable ride home. I had questions. I needed to understand my own dietary choices. Re-think them, yet again. But this time with a whole new set of ideas and ethics.
Alighting from my car, walking towards the gate, I met a neighbour and we decided to drive down to Morjhim Beach for a quick walk. On the way there, I narrated this pig incident. He mentioned seeing her walking them every day and, like me, couldn’t  fathom how people did it -- rear them and then kill them. He said that he was grateful, for these very reasons, that he didn’t eat pork and chicken. My immediate neighbours, who don’t live in the Riviera complex but with whom we share a common boundary wall, raise chickens, who crow at the crack of dawn and often drop in for a wander in the Sapphire gardens. I’ve never asked but now assume that they probably eat them at some point too. I assume they farm the eggs for personal consumption because when they are particularly noisy, which is at relatively frequent intervals, my maid remarks that they must be laying eggs today. 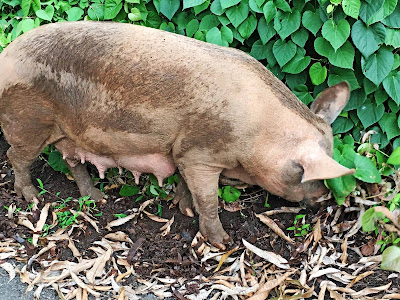 It seems standard practice in these parts, in the relative rural environs of Goa, to rear the meat and eat it. Jennifer’s pigs are fed from the stuff she and her husband collect from hotel left-overs and their walk through the lanes of Bammon Wado, where we live, foraging for food. My maid who also lives in the same village revealed that these pigs are expensive to rear and that her family also used to breed and sell pigs when they were ready to eat. She stated, as an aside, that Jennifer was quite indiscriminate with regard to where her pigs fed. Often desecrating the gardens of her neighbours and inviting much wrath, but that she is aggressive and continues without care.  When Jennifer and her family cut a pig, they do so at home, themselves, and sell it on Wednesdays at the Siolim Parish Bazaar. A social acquaintance, someone I’ve only recently met, declared that this was probably the best meat to buy as it is fresh. But I would rather go into a store and pick up something I hadn’t seen alive and made acquaintance with. I’m squeamish about this whole idea of knowing the being I am eating, however brief the acquaintance. 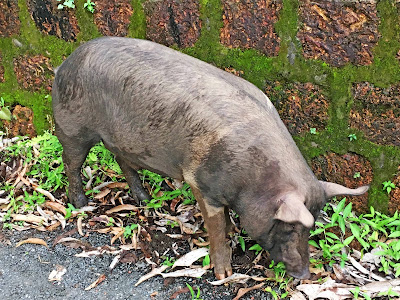 I’ve grown up on a non-vegetarian diet. There were no restrictions on what we ate except beef but even that was overcome while I studied in London primarily because, in the hostel I stayed in, not eating beef meant I would get an omelette on an average of three to four times a week. I’d complain and Linda Washington, a cynical fellow hosteller, fed up with the frequent groans, goaded me to try it,  insisting it was the Jersey cow therefore my devout grandmother, a Krishna bhakt, would have no qualms. Through her taunts, I interrogated my belief and realised that I didn’t know why we revered the cow and when I didn’t find adequate answers elsewhere, I decided to give it a try.  It was okay then but I no longer eat it as I find it very heavy to digest. But that is a personal choice and not because it is taboo or from any other inhibiting factors.
Aside from this, I eat pretty much everything, even though the preference at home is to be mostly vegetarian.  But because of my rather involved yoga, meditation and healing practice, I often face the query: “You still eat meat?” And to this, I’ve never had qualms in responding that indeed I do because a wise man once told me that I must learn to ‘manage’ all kinds of energy. And that is what I do. Depending on my engagement with the world, whether it is a lot of external doing and less contemplation for the day or week, or the other way around, my food is based on the kind of energy that I need. And this includes regular fasting too.
That very day, when I met Jennifer walking her pigs,  a friend shared, on our school WhatsApp group, an incident of how Asha Bhonsle, who had acute lower spinal cord pain and couldn’t bend, was at the Golden Temple in Amritsar, where she prayed to be healed. She was instantly cured of her ailment, for right there and then, is said to have bent down spontaneously.  Ideas of faith and miracles did the rounds in the group, but while Faith is indeed part of it, the purity of energy plays a huge role. As a healer, I am familiar with how relevant it is that there is this element which must be present in the asking, the receiver and also of the environment the healing is asked in. Here the humility of Asha in pain, and the sacredness with which people visiting the golden temple imbue its sanctorum, created the perfect synergy. 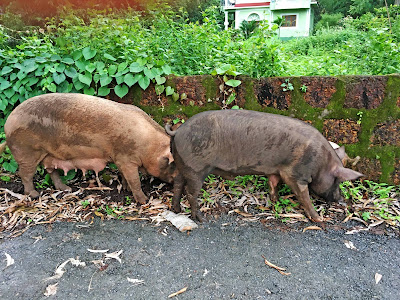 My question is: what’s the dharma in this instance? To my mind, it raises a similar dilemma: to eat or not to eat, or what to eat. So, if the human dharma is our own survival, which does necessitate some intake of food, is there any other ethic that must be involved in our decision making? Other than eating what we need as we need it? Eating for survival and not greed, managing the energy according to necessity, is that the mantra we should apply? 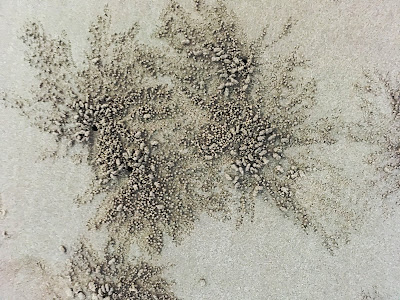 Posted by Gopika Nath at 11:48 6 comments: Links to this post