April was quite pleasant this year so I decided to walk to my singing class; camera in hand, looking out for chai wala’s. I found one on the kerb opposite in Palam Vihar, and promptly focussed the lens, capturing details of the cart, kettle, glass and utensils. The biscuit canisters and sachets of gutka that hung like a curtain around the cart, didn’t give a clear view of the person’s face. When he emerged from behind this to serve a customer, I zoomed in, and it dawned upon me that ‘the person’ was a child, no more than ten or twelve years old. 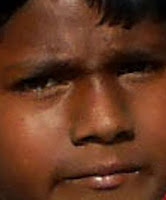 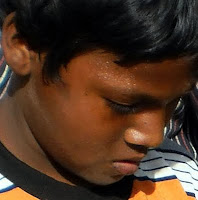 Dark brown skin, coal-black hair locks brushing sweat droplets on forehead, a gently furrowed brow and narrowed eyes looked at me. There was none of that expectant, wide-open child-like curiosity nor was he willing to have his photograph taken, as children usually do. With small hands, barely able to clutch the black handle, he lifted a large aluminium kettle filled with tea, pouring the hot liquid into a ridged, short glass  held with the other hand. A pouting lower lip and the beads of sweat were the only signs that this was not such a simple task. Long eye-lashes and this face of innocence almost lost, stopped my tourist-like voyeuristic photographing. I felt disturbed. 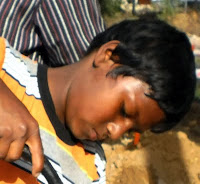 Just then a big man came into the frame. I asked, “Is he your son” to which he replied “you could say that”. I could not restrain myself, and said “do you realize that he is under age and making him work for you is against the law?” This was greeted with silence, but I saw a glint in the boy’s eyes which emboldened me to continue, saying that if he is like a son, he should educate the boy. “He could go to evening school”, I suggested tentatively. The boy beamed, but the burly man was silent. I had probably opened Pandora’s Box; this made me feel guilty.

I was not very happy with myself and didn’t quite know what to do now, so walked on. About ten yards from this tea stall a Police Gypsy was parked under the shade of a tree; I stopped and addressed the officers Jaichand and Bhagwan Dass, asking why they permitted this man to employ a child. Very politely they said “Ma’am, it is not quite so simple; their parents send them to earn. It’s a question of survival. This boy is probably the oldest and there are more mouths to feed at home.” I was not unaware of such practices. A maid I had once employed told me, she had started working aged nine years, caring for a six year old child, while its parents went to work. So I knew there was truth in what they said; but persisted nonetheless, asking them to prevail upon the owner of the tea-stall, to at least do something to educate him. 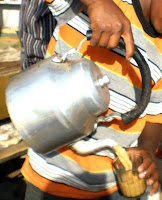 For days I thought about the boy and the law which decreed that employing a child under fourteen was a crime. How was one to implement this in the face of the situation I had encountered? I spoke to some people who engage in social work and they all said it really was a very complex situation to which there were no easy answers. Gradually, I started looking at it from a different perspective. I thought about the fact that this child and all the people who work on the street do so because they have custom. They provide cheap tea for those who can’t pay more. They do it for a living, working in gruelling conditions that I could never withstand. I started appreciating his courage. I saw a spiritedness that I now admired, rather than feeling sorry for him. I felt that instead of wanting to change the world, what one possibly needed was to accept it for what it was; see people in difficult situations as an inspiration; appreciate facets of their existence rather than seek to change this to fit some ideal that I may deem appropriate. 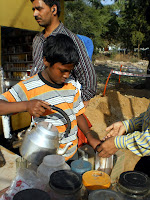 For a couple of hours I was at peace and managed to get some work done, but grew restless again. I felt inadequate, powerless. What was the point of having a law if it couldn’t be implemented? What was the point of my privilege and education if all I could do was observe? Wasn’t this really just another way of saying look the other way, because I was reluctant to get involved? If I admired the courage and spirit in a child who laboured in hostile conditions, where was my courage and spirit, if the best I could do was to only change my perspective? So I went back to the tea stall outside and talked to the boy, asked if he would like to study.

The first time that I’d seen him he was dressed in a clean, gold, grey and white, horizontal striped T-shirt and looked different. Today, he wore a dirty white one, looked really scruffy and despite pouring over his photo for days, I found it hard to recognize him. He greeted my question with silence. Then went to the burly man and said something but didn’t come back to me, so I went up and reminded the man that I’d been here a couple of weeks ago, taking pictures. He assured me good-naturedly, that he remembered me well. I said that if the boy wanted to study, I would like to help.

The principal of a government school lived in the same condominium as I did and one of the women in my tower ran a small school for servant’s children, so I was hopeful of being able to help. The boy murmured something to the big man, who informed me that he has a father and has to ask him. So I said, “You do that and I shall come again”. I came home and made some phone calls and was told that by law no school could refuse to enrol him if he was less than fourteen years of age. I felt reassured that I hadn’t raised his hopes for nothing.

The next day, en route to , I stopped by to ask what they had decided. His father, a cycle-rickshaw-wala, had apparently refused my offer to help educate him. On asking the boy what he wanted to do, I got no response. I persisted, so he said they were returning to their village in . I asked when he’d be back; to be informed that they may not return. I promised to look out for him and take up the matter again, adding that he should think about it. 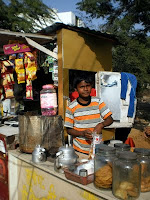 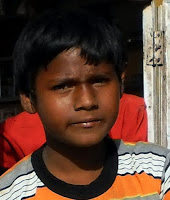 Till then I had not asked his name. He was Jehangir. When Bhupinder, the driver heard him tell me, he promptly said “Ma’am yeh mussalman hai, yeh nahin padenge![i]” I was stunned to hear this generalized and prejudiced view but realized that our social structure is very complex and people like Jehangir and Bhupinder have grown up with different values. Their ideas, however inappropriate I think them to be, are not going to be easy to change. In their view of the world, my ideals could well be misplaced. 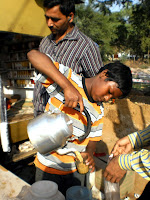 Frankly, I had not been too surprised at Jehangir’s father’s response. It was not the first time I had offered to educate someone and been turned away. Even those who were willing didn’t persist beyond a couple of days. Something clearly intimidated them and none had been willing to share. But Mahipal, one of my servants, put it into some perspective when he said that he’d studied up to class VIII, but was still a servant, so what had education done to change this? It’s not an argument I accept, but do see that a great deal needs to change for education to be valued beyond being the means to an enhanced livelihood or life-style.

Although I felt better for trying, I am not certain that Jehangir will take up the challenge. It’s possible that the tea-stall owner, however amiable he may have seemed in the face of my probing, may have compelled Jehangir’s father to refuse the offer. A number of factors could be at play that I would never know of. I asked myself how far I was prepared to go with this. Could I really invest the energy it would require to push this through? Would it be appropriate if he and his family were not willing?