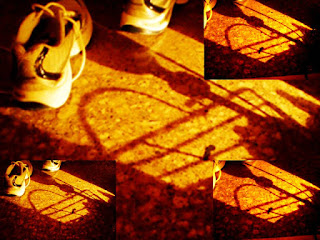 Its Sunday, I usually lie in but woke up early today. Actually, I woke up at 2.00 am and oddly, started taking photographs of shadows, of various things around my bedside, created by the soft yellow light I had switched on to drink some water. Thereafter I did not go back to sleep. I tried, but in doing yoga nidra, so that I could relax and get back to sleep I started meditating but, did fall asleep eventually. When I woke up, the first thing I wanted to do was to pick up the camera and examine photos of the scene which had mesmerised me in that half asleep state.

But, I first made a pot of tea to accompany this exercise. I used Orange Pekoe Darjeeling tea leaves with a dash of Nilgiri. They worked well together. The warm, afternoon flavour of a southern Nilgiri complemented the rather smoky flavour of the north Indian Orange pekoe. I drank my tea, listening to Dvorak’s Cello Concerto in B minor, which is utterly soulful and the sombre cello appropriately reflective of my introspective mood. On most occasions it moves me to tears.  The second movement of the concerto – Adagio ma non troppo[i] is my favourite part. In this 1978 recording I listened to, it is played by the renowned Russian Cellist Mstislav Rostropovich[ii] with the London  Philharmonic Orchestra, conducted by Carla Maria Guilini. This flawless, incredibly moving performance by Rostropovich is considered one of the greatest recordings of the twentieth century.
[I could not find this Rostropovich recording on the net, but this is a fabulous rendition of Dvorak's Adagio by Jaqueline du Pre]
The sublime adagio was written by Dvorak in memory of his pupil Josefina whom he had fallen in love with but who became his sister-in-law, not his wife. His deep affection for her remained and it was news of her failing health that changed the tenor of this concerto, which had started as an essay in retrospection of landscapes, to that of lost loves. The melody moves poignantly from its initial rustic flavour to that of a lover’s anguish. Written in New York in the winter of 1894-95, the Czechoslovakian composer’s passionate melodic outburst includes traces of an earlier composition – a song favoured by Josefina. This sad story always heightens my appreciation of the heart rending music it inspired. This morning, it complimented my soulful mood, allowing me to wallow.


It was September, we had not had much rain this monsoon but it did rain last night, after a long dry spell. The heavens poured and when I woke in the middle of the night, I stood awhile just observing the clouds shed their elongated tears as the earth soaked it all in. After this downpour the sun was out today but, the tone of the day was somehow still melancholic. I lit a candle, in a caddy, to heat up few drops of geranium essential oil for an uplifting fragrance. And then, picked up my point and shoot Olympus camera and studied the photographs I had taken while half asleep in the wee hours of the morning. 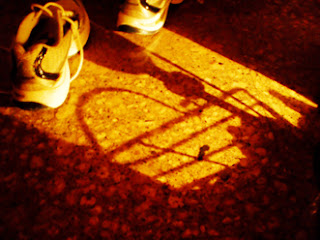 It was the same scene I had photographed also around 11.35 pm - of the shadow contours of a tray, a light and wires, created by the bedside light behind them, onto the granite floor, drawing me into the darkness, lines and textures of the imagery. The colour tones are all shades of brown - from almost golden to raw sienna, dark umber and the dark grey of the lamp that I use, when I embroider at night. It has a fluorescent tube which helps balance the otherwise predominantly yellow incandescent light in the room. It helps me work better with coloured threads if the light is neither yellow nor fluorescent. This lamp has a long horizontal, tubular shade to house the tube, but looks different in the shadow where it resembles something akin to an upright vase, with a short stand and then an equally short, but tubular receptacle rising vertically above it. It’s an odd shape. 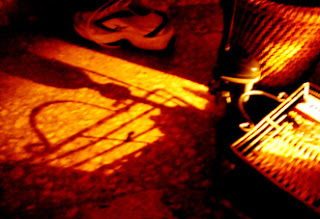 On the low, marble bed-side table lays an aluminium framed raffia tray with wobbly metal handles on either side. It is an old tray; gifted one Diwali long ago, filled with nuts and chocolates. I now use it to hold the night water-thermos and sundry stuff on my bedside. There is also a wicker waste-paper basket in the vicinity of the bedside paraphernalia and, in the near darkness of the night-photos I am drawn into the odd shapes and patterns of this scene which also features my Reeboks.  They, however, are not creating any shadows. Although slightly yellowed by the light, the otherwise white and blue of the shoe design is clearly visible. It is mostly the heel and contour of the base that is seen. Their lighter colour adds depth to the shadows and the contrast highlights their presence in the picture. I notice they are positioned as if someone had just taken a couple of footsteps.


The warm tone of shadows around this is comforting even though the forms and the darker hues are disconcerting. More than anything else what perplexes me is that this scene is something which I must see every night, so what is the sudden attraction? Why did I take pictures at 11.35 pm and then also wake up at 2.00 am and take some more? The question of what was I trying to tell myself, by drawing my attention to this incongruous imagery, prompted much thought as I drank a pot full of Nilgiri and Orange Pekoe tea. 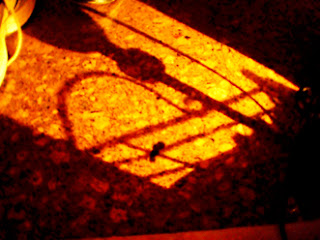 The robust blend of tea and its colour are reciprocated by the warm tones of the granite floor lit at night. Golden tones of brown have replaced an otherwise dull, reddish hue, of pale, washed-out burnt sienna, mottled with blackish dots. It is not my most favourite floor but Ansal’s had built the apartment with this flooring when I bought it and changing it would have been an extravagance. I was also short of time as I had to move in quickly, so the not-so-nice floor tiles stayed.
They form a dark but monochromatic canvas of some oddly shaped daubs, amid flatter shapes which are not much more than blobs, or something that I imagine someone called Jackson Pollock-Cezanne may have created, where ‘Pollockian’ paint daubs have been flattened in a ‘Cezannesque’ manner. Even though I do not quite appreciate the design, I have to admit that at 2.00 am they made a perfect backdrop, with their motley dots and flattened daubs, for the sharp, dark, black shadows that fell upon them.


This contrast is offset by the softer raffia weave of the night-tray which is complimented by the raffia of the wicker basket, and all together it is quite a picture. The Reeboks are placed as if I had just taken them off. This is odd, as I have been swimming and therefore could not have worn them for a while. Is this merely a coincidence, or something that alludes to someone about to run away from the scene? Or maybe it could be an indication of someone walking into it? My shoes, at home, on a night that I cannot sleep and am taking photographs at 2.00 am, is certainly not a coincidence.


I have learned from years of watching my mind of ‘funny’ things that happen when I do not spend enough time looking at my thoughts. It’s like those weird dreams we sometimes have where everything is jumbled up and seems fantastical, even surreal. The message, however, is not lost on me. At that time of the night, what can I possibly run from but myself? But is that ever realistically possible? And the fact that I meditated for much of the remainder of the night tells me that I did not succeed. But I am really not much wiser this morning and the photos compel me to think. 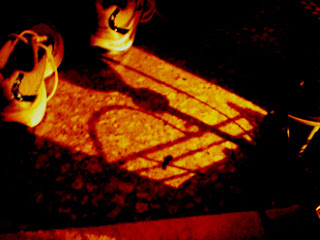 I have been busy. The last couple of weeks have been hectic. Something or the other needs attention, or so I tell myself, even as I know that mostly what really needs attention is in my mind. I have observed how much my thoughts are responsible for whatever is going-on in the external world, in my life as it unfolds but, still, I seem to be avoiding something. Tricky and discomfiting, but true.


I understand; I am aware of how things work but feel the resistance nonetheless. I have used my mind for all sorts of tense situations this past week and I really do not want to do more mental work at this point. I’d much rather focus on Dvorak’s lost love, and listen to his heart wrenching anguish than do some deep analysis of my own thoughts. Neither am I silent enough to ‘feel’ things beyond the emotional. In such a scenario, pushing myself only succeeds in getting me to switch on the internet and play scrabble on Facebook instead. Or play detective and study the ‘crime scene’, examining unattractive floor tiles in my apartment, as I have done for the better part of this morning.


However, this exercise has not been such a waste of time. Through a preliminary study of the photographs and reflections, I realise it is not the shadows that have much to say. They set the tone by highlighting the shoes which suggested someone could be entering, leaving or something along those lines. I know I should do some serious contemplation. A little coaxing always helps and its amazing how in that half-asleep state, I took photos which intrigued, leading to ruminations on the granite canvas, to realise that everything was not quite under control as I had thought when I turned in, to sleep last night.


Fascinating as the subtle nuances of life can be, sometimes I just do not want to go deeper and I do get my moments of reprieve. But, then, just like with these ‘2.00 am shadows’, some unseen energy finds a way to nudge me to into paying more attention to my thoughts and not sleep-walk through life.