Or anywhere.
My ideal black, unsweetened coffee sits at the opposite end of the taste bud spectrum from the powerfully sweet and milky chai of the Kutchi palette. But here I am at Gopika’s invitation to Garam masala chai (and she knows my preference) to share my experience of working in Kutch

Twenty something years ago, I had never heard of Kutch and for those blog followers with the same question mark in their heads, it is the district with a very singular identity that sits at the northern end of Gujarat, next to the Pakistan border.

Neither did I have a burning interest in the craft sector – just a vague idea that traditional Asian textiles could be an interesting platform for contemporary art.
My induction into and subsequent fascination with the textile traditions of Kutch came about from a chance meeting in my home city of Perth, Western Australia with Indian designer Kirit Dave. He suggested I go there, and without much forethought, or research, I did.

Kutch is not an easy climate and terrain even now, but back then it was much more rigorous. The roads were poor, the electricity was off more than on, telephones barely existed, and travelling was in old Ambassador cars well past their retirement age. 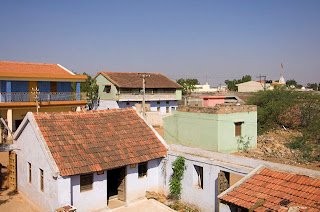 What draws me there? I have joked that it is like in being in a slightly dysfunctional long-term relationship. Old diary entries tell it all: the good, the bad, the endlessly frustrating, and the much-needed tranquillity. 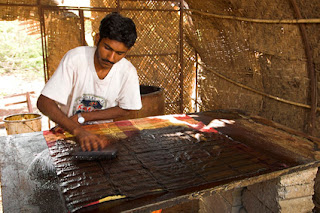 Kutch has an amazing confluence of textile crafts stemming from centuries of migration from what are now Afghanistan, Pakistan, the Middle East, and other parts of India. There are weavers, printers working with four types of block printing and at least 16 different styles of embroidery done by different communities. 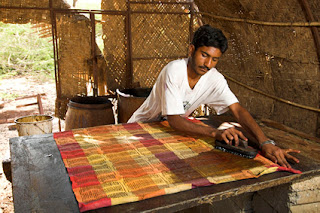 What first intrigued me were the endless possibilities inherent in block printing – not within the existing traditions of exquisitely accurate registration of patterns, but more in the way of reproducing an abstracted form of drawing: lines and marks floating without symmetry on the fabric. I am still as excited by block printing, as I was when I started. It took me longer to decode embroidery and work out how to connect it with my linear mark making.

‘Grid forms, and lines contained within grids are where I am starting. I have also used some photocopies of the structure of Japanese cloth as an impetus.

As I was drawing I started to think about using the blocks in simple, but strong graphic black and white, with a large border of brightly coloured embroidery. Maybe this will be left to Rabari[1] women, or maybe I will do the design and get it done with Sodha[2] women in Pakko[3]. This is in keeping with local odhnis [shawls], which have fields of black wool with simple tie-dye and then amazingly rich borders. 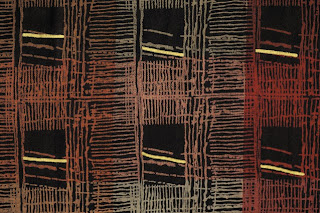 August 1991 (My first visit to Kutch -why did I ever go in oppressively humid August?)

The horizon began to fill up with a sinister, foreboding, dark heavy purple cloud….As we left [the main city] Bhuj, a powerful wind started to pick up dirt and debris, flinging it around unpredictably, reducing visibility to an impenetrable  pale red murk…The storm finally broke….great columns of lightning and torrential rain smashed to the ground…. Our car only had one windscreen wiper. 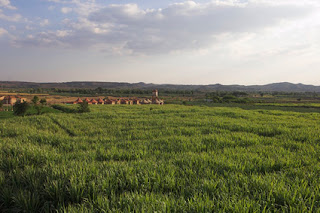 The road to the farm was a mess of fallen branches and mud. One large tree trunk had fallen across the road. The guys got out to shift it and I started to go with them but they stopped me…I told them later that they are more chivalrous than Australian men, who would have told me to get out of the car, roll up my sleeves and push hard.

When we finally got to the farmhouse there was no food left. The rain made the air even more clammy and humid. I sat on a bench and disturbed a cloud of insects, who retaliated by swarming down my blouse.’

‘Sunday… Very quickly it has gone from winter to summer in Kutch. Just two weeks ago there was snow on the Himalayas and a biting wind hurried across the salt marsh deserts, through our clothes and right into our bones. Now the evenings are balmy and the air is perfumed with the scent of lime trees in flower….

Since 6.00 a.m. Rimalbhai, the farmer has been coaxing his bullocks and cows to wake up. His voice is louder than truck horns on the highway and has the same tone. 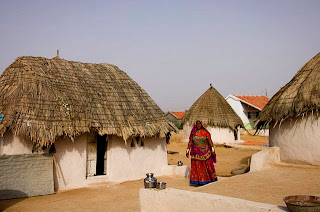 [In the morning] I sat on the verandah of my bhunga[4] eating breakfast and watching the passing parade of people. The farmer’s wife Leriben made bhakuri[5] on the griddle and, to escape the chai, I have Twinings ginger and lemon tea and coffee with me.

There is a constant flow of visitors [to the farm] from nearby Bhujodi village. Some of the women wear traditional clothing…. we have nicknamed one ‘Mrs Mix not Match’ because of the astonishing arrangement of colours and patterns displayed in all her outfits.

One day it was a loudly floral orange ghagra skirt over a red petticoat. A long turquoise odni [shawl] with a diamond print hung from her head, long enough to tuck into the ghagra forming another over skirt. Above the waist she wore a purple backless choli [blouse] with turquoise sleeves and a turquoise and orange hem. A choli is shaped a bit like a brassiere with two cups in the front for the breasts….gravity had triumphed and the cups were in one place and the breasts another. Big rolls of fat poured over the sides of the choli. But she was nicely unconcerned about any of this. 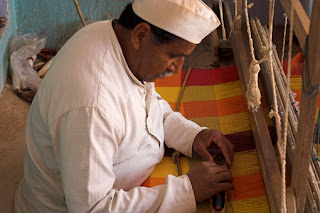 ‘The fabric that I wanted from Devjibhai was a nice cotton and silk mix with a subtle texture that would suggest parchment. But as soon as this was selected, it turned out that the silk fibre was not available.
Unseasonal rains came. Block printing stopped at Ajrakhpur. They have no shelter for the fabric to dry out, which seems incredible in a village that relies entirely on printing and dyeing for its livelihood….
Tailors suddenly went into short supply. There is a huge pilgrimage in Kutch…70,000 people were estimated to be walking through... And in amongst this throng were all my tailors. Who cares about a Delhi deadline when the Mata[6] is calling? Let’s hope that when they return blessed, they are also refreshed and ready for the challenge I want to inflict on them’. 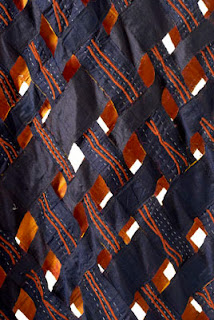 But, in that astonishing and miraculous Indian way in which disaster is averted at the 11th hour, collections do come together. What has strangely evolved over the years is that complicated, one-off pieces suitable for exhibition in art galleries work best and that is what we have been doing for the past decade.
None of this could happen without the extraordinary skill and willingness of all the artisans that I work with and I salute and honour them. Equally the work can only come together because of the mediation of Kirit Dave, who has over the years translated my ideas from English ‘artspeak’ to Gujarati, and his production manager Dhaval Raval, who, after I have left, ensures deadlines are met. 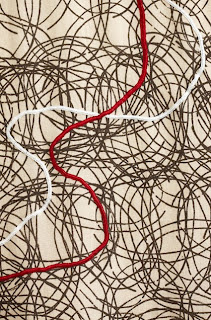 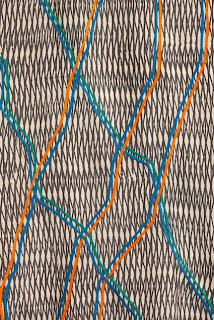 In Ahmedabad earlier this year I happened to have lunch with a group of women travellers, one of whom had taught at the Kala Raksha Vidhyalaya Design School for traditional artisans in Kutch. The exercise that she set her group was to design in response to music, letting their tie-dye or blocks flow over the cloth as the chords suggested. She told me one of the students in the class said ‘Ah, there is this Australian designer who has been coming for years and now we have designed to music I finally understand what she was doing’. 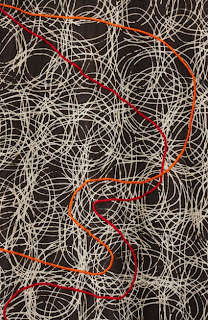 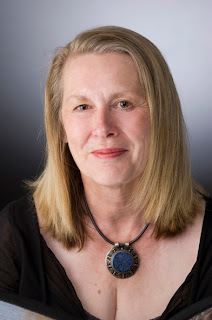 Thank you, I really appreciate that you said that, and to all the artisans in Kutch, long may we continue to make music together. But it is still no to the chai.

[1] Members of the Rabari or Rewari live throughout the Rajasthan and Gujarat states in India. There are some Rabari families who also live in Pakistan especially in the region of Sindh. Rabaris are also known by other names such as Desai, Dewasi, Hiravanshi, Rebari, Rebadi, and Rayka or Raika. The word "rabari" basically means the "Path breakers". This is because hundreds of Rajputs migrated to the desert in protection of the Jaisalmer state against the Mughals. Since then, they were left out of the Rajput community and were later known as Rabari. The Rabari's main business has been to be raise cattle, camels and goats; for some traditional-minded families this is still the case. However, the new generation, as they become better educated, are slowly moving away from this way of life.
[2] Sodha Rajput migrations to Kutch started in 1971 after the Indo-Pak war. Originating from Thar Parkar in east Sindh, Pakistan they had relatives in Rajasthan, Gujarat, and Kutch, hence, they settled here and have led a contended life in Kutch. There are 32 Sodha villages in Kutch about 25,000 members of the group with 4,000 artisans among them
[3] Pakko embroidery is done by the Sodha, Rajput and Megwar communities. Pakko literally means solid.  The designs and motifs are very similar to Aahir, but slightly more geometric. The outline is done with a square chain-stitch, but the filling is a dense variation of a buttonhole stitch, which gives a raised appearance. Mirrors are used frequently. The original design is drawn freehand and then transferred to the cloth through a stencil
[4] Bhungas are closely linked to the identity of Kutch desert areas. They are single cylindrical structures put close to each other to form a house. In common terminology, each bhunga would be equivalent to a room in a house. As per one story, after the 1819 earthquake, all building craftsmen from Sindh and Kutch region got together to discuss the damage caused to the houses in the region by the earthquake. After a series of discussions, they came up with the circular house-form design of bhungas which is in practice since then. Even after the earthquake of 2001, it was observed that most of the bhunga houses survived the earthquake despite being very close to the epicentre of the earthquake, while many other constructions failed.


[5]Bhakri are a dense form of roti made from coarse wheat flour and ghee. They are found throughout the western states of India and can be either soft or hard. In Kutch they are hard and biscuit like and can be eaten at any meal  with sabzi,[veggies] curd and pickles. I eat them for breakfast with fruit and honey, but this is not traditional.