Vrooom vrooom! A motor bike revs up as it drives up the Pilerne road. It's powerful thrusts breaking the silence of the morning, otherwise punctuated with a neighbouring roosters daily cry: kukroku, kuu, kukrukoo! The Verem-Pilerne road is a busy one as it comes from Panjim and continues onwards to the town of Mapusa and almost all day I can hear sounds of various engines motoring up and down the narrow, coconut palm-lined, tarred road.
Each morning, I sit on the balcony of my apartment, sipping a cup of chai and just being with myself. The traffic up and down with the swishing of tyres and occasional shouts to gain the attention of a passing friend doesn’t bother me. It's sort of reassuring because through this, despite being alone, I get a sense of having people around me.
The bamboo is nudging its fresh green leaves in through the black wrought iron railings of the verandah. But, as yet, I can’t touch it, unless I stand up, lean across the railing and bend down a bit. And I haven't wanted to do that. It's just peaceful to have her unquestioning presence, a familiar sight each morning. I can hear the tweets and melodious chuckles of birds from within the bushes beyond the bamboo. Graceful Areca palms sway beside the bamboo and line the pathways, all around the La Mer apartment complex, where I've taken up residence for a few months.
In a neighbouring, vacant plot, tall Saal trees stand guard. The light colour of their statuesque trunks, which draw an almost-straight, vertical line into the sky, is echoed by the fading hues of the mesh of the iron fence that separates us. It was probably never painted and as the colour of iron faded through the rigour of seasonal rain and sunshine, the Saal grew taller; it's bark thickening to the timber merchants' satisfaction. Apparently, it takes many, many years for these trees to become wood that’s marketable. 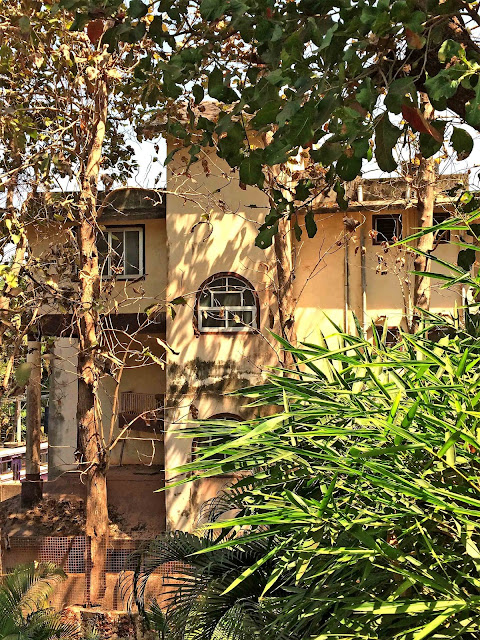 I like these trees with their over-hanging branches and large, very large, over-sized leaves that are turning from green to brown and often fall onto me as I swim in the pool or walk around. Like abandoned or lost feathers they waft down weighted by their size - swiftly and softly - unless I happen to be in their path of descent. And then, after an almost inaudible crackle of leaf breaking off from its stem or branch, I feel a gentle thump or the graze of a dried leaf brushing past exposed limbs as it descends, uncaring of who or what stands in its path.
When I'm swimming close to sunset and in the fading light, it can be quite scary. I've often wondered and shuddered at which coarse creature has chosen to kiss my arm or hand that’s risen out of the water and is reaching back into the pool to push the water backwards, helping move my body forward in a free-style stroke. By now I should know it's the free-falling, over-sized, wizened and brittle Saal leaves but, in that moment of rough caress, I'm always petrified. I lose my swimming stride and it takes a good few moments for me to allay the fear of encountering either a snake or frog or praying mantis - creatures that have been spied around these parts - before I resume my swim.
Thankfully, I haven't seen any snakes but frogs have crossed my path and one even came visiting while the girls were busy cleaning my rooms. It jumped, they jumped and I did an unbelievably long jump screaming loudly as I did. Spontaneous and prompted by fear, I've never managed such a leap since, not even in jest, while narrating the incident and trying to demonstrate the gigantic yelp and the leap it inspired. And praying mantises are everywhere, silently praying as they seat themselves on the sun beds or look curiously at me through glass panes. As I peer to get a closer look, their brown eyes and heart-shaped green heads turn in curiosity. Sometimes it seems that we are having a conversation, that they understand and respond to what I'm doing and saying. But maybe not. For all I know, I am an oversized alien in their view of things. So, these creatures are not imagined, they're very much around me and I don't handle our encounters with ease, not unless I am behind glass doors. A lass that's city born and bred, much as I love nature, I'm squeamish about other creatures. Well, in truth, some of our own species are also not excluded from this kind of uneasiness.
The tree right in front of me has grown so tall that at first-floor height, where I sit, there are no leaves – well, almost none. But that is what draws my attention, in the midst of this morning's traffic on the Pilerne Road. The lowest branches fan out in a kind of elegant dance-mudra on three sides, and these branches and sub-branches have just about three brown leaves hanging on them but barely - they're on the verge of dropping to the ground. Crinkled like a woman who has lived her life, exhausted each breath granted her, awaiting the final call of the universe; to take that leap of faith into the unknown and embrace a life below the branches of the tree that lofted her high into the blue of sky. The wind tugs East and then West, but the resilient stems don't let go. It's not time yet. There is also the odd leaf which has fallen off a higher branch and lodged itself into an inverted armpit, where an arm-like branch extends outwards from the tree trunk. Held between limbs that stall its descent into the earth, these leaves look as if they're still attached to the branch. Until a forceful gust of Vayu jolts one of them out and it rustles and crackles before taking its final bow amid the low-lying burgundy, purple and green plants in the garden below. 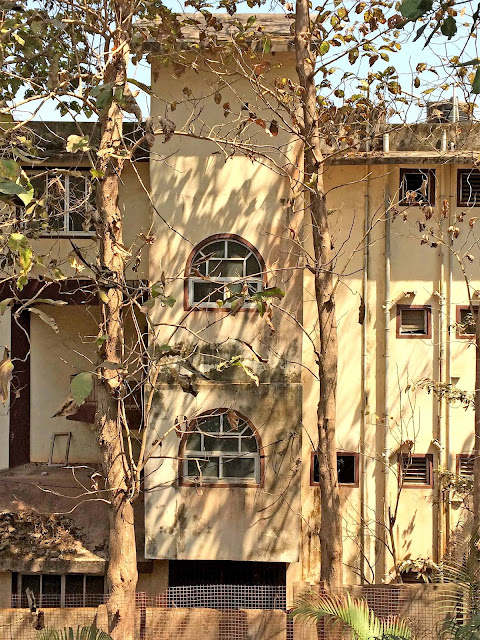 Just then, as my glance is occupied by the falling leaf, a large, blue-black bird, with curiously contrasted, reddish-brown wings, flies into view. My mobile phone rings, and it flies away before I can look long enough to study its visage. But this much I did see: it had a sturdy red beak.
Despite the bikes, buses and cars (some are rather noisy too) but undisturbed, nonetheless, I enjoy the silent companionship of the bamboo, palms and many other plants in the garden below me. It's become a breakfast ritual I now look forward to. The passing noise of people going about their business doesn't disturb me, it never has. It's the sound of people trying too hard to enjoy themselves, playing loud music as they pose for selfies, which grates. And it's not just here in Goa but in Delhi and Gurgaon too, road traffic or trains never shattered the silence of contemplation but unnaturally loud people noises always did.
This morning two young girls, dressed to the nines in their minuscule shorts, Ts and over-sized sunglasses, were playing some loud, music on their phones. They didn't seem to be listening to the lyrics or beat and neither were they listening to and in consonance with the plants they were posing among for their selfies. The incongruous, unwelcome sounds invaded my otherwise silent space. I cringed. I hate it when people bring loud music into such a tranquil environment. If you are here to bask in the beauty of nature, wouldn't it be more appropriate to listen to the rustle in the trees and let your silence invite the butterflies to come greet you? I called out “hello, hi, excuse-me!” to no avail. Barely a few yards away from me, they were deaf to my voice, drowned out by the loudness they played.
I'm peeved but tell myself they're just passing through, like the traffic on Pilerne Road. I decide to take out my Bluetooth speaker and put on some soothing earth sounds. Taking a few deep breaths, I ignore the girls and continue studying the leaves on the Saal trees, which fascinate me. 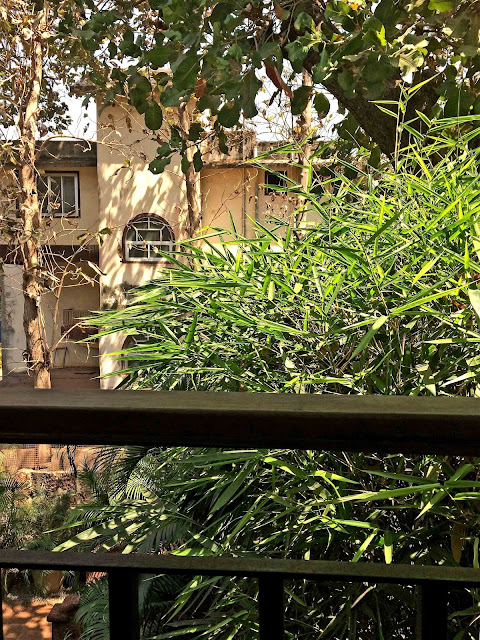 There's still some tea in the thermos. I pour the brew of Earl Grey tea into my mug and observe the insect-eaten holes in the leaves and the lace-like gathering of tiny, ever so small and delicate, feather-like extensions that grow at the tip of each branch. Where many such branches come close enough, this gossamer spider web-like growth gently meshes with its counterpart on another high branch and it looks as if nature is crocheting the whole sky with lightly beige coloured, fine lace, under-laid by a luminous fabric of ever-changing blue. 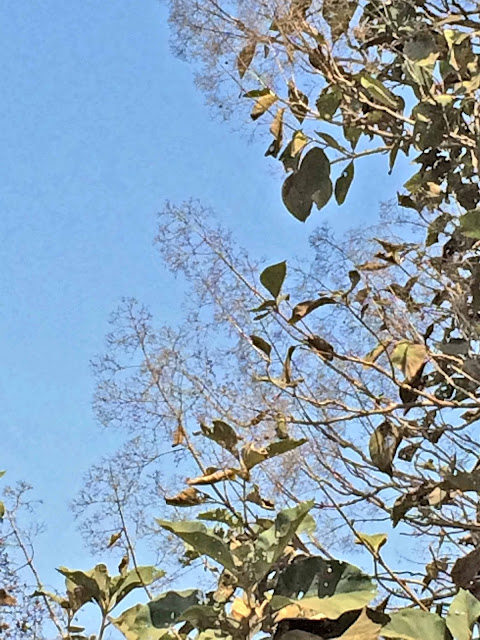