And Looking, I Found Myself Change

It all started when I bought a new phone in March 2009. It had a user friendly 3.2 mega-pixel camera that wasn’t half bad. The images I took were not terribly good but I was inspired to click anything and everything that caught my attention. In doing this, I started focussing on little things in my everyday life from left over food in the dishes to dregs of coffee or tea in a cup. Although I must have photographed everything from cut flowers to shadow lines and more, it was the dregs in the tea cup that fascinated me. 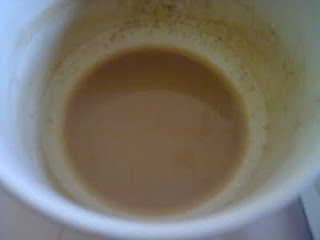 I enjoy my cup of tea and have a cupboard full of various teas from Jasmine to Darjeeling, Nilgiri, Assam, Herbal teas, Japanese Sencha and Genmaicha and I also enjoy a cup of good old desi masala chai. All of them have a different texture or leaf. The jasmine leaves uncurl their sly tendrils under the influence of hot water, looking suspiciously serpent like. Remnants of various condiments of a rich masala chai, stain the cup with lines so evocative that I have spent the better part of two years, recording them. Photographing marks left in the cup, half drunk or emptied of all the liquid content. In the process I have also studied dimensions of the cups and mugs that I have drunk from.

I pondered on these images for a long time, wondering how to translate them into something I could share and decided to have them digitally printed onto fabric. I then worked with layered images, using the ‘stains’ to reflect a state of mind. These marks became evocative of guilt, shame and blame, the kind of thoughts we carry around us that come up under self-reflection or introspection; of thoughts mulling over a cup of tea. 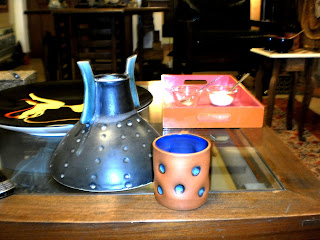 There have been many instances in my life, where I think of what it would have been like had I done things differently. What would life have been like, for instance, if I had not returned to India, from London in the nineteen-eighties? Or if I had started out as an artist rather than pursuing a career in design to evolve as an artist, or if I had not entered into various relationships? The list was endless and the marks in the tea-cups thereon, allowed me to go back in memory, delve deep into my psyche revealing familial histories and national influences; making me realise I could not have done any different. Life played herself out such that this is what it was meant to be. I have never really accepted the concept of destiny but started realizing that the only choice one ever has is the attitude with which we accept what occurs in life. 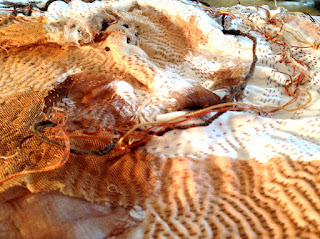 This exploration was not necessarily comforting and dealing with various feelings and thoughts, I would tear the fabric, pull it into different directions, distorting the weave, creating bunches and bulges which the Kantha or running stitch that I have chosen to work with, often exaggerated or quelled, depending upon the mood I wanted to portray. I discovered the Kantha through an article I read three decades ago, on the Sujni’s of Bihar, where women would use old worn-out sarees, stitching them together to make quilts. I liked the idea of taking the old and making something useful from what has been, fashioning it into something new. It allowed me the grace to pick up old memories, wounds and issues, deal with them through the process of tearing, layering and stitching to lend another perspective to things, renewing the spirit, taking control of the past towards deeper realizations which empowered through the process of looking. These meditations on tea, tea leaves, tea cups and the process of drinking became a fascination; you could even call it a kind of obsession for despite taking at least a thousand photographs I keep clicking the ubiquitous tea cup. I just cannot resist. Each day there seems to be yet another nuance that I absolutely must have in my collection. 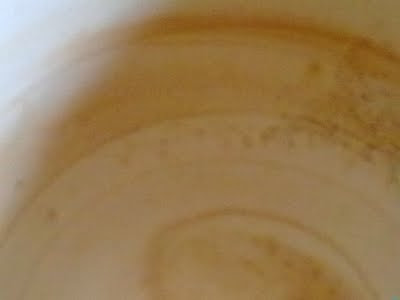 I have since acquired a more respectable camera which prompted me to go farther a field and look at how people around me engage with drinking tea. I didn’t want to make this into an elaborate project extraneous to my life and surroundings so I just stopped at various points on my route from Gurgaon to Delhi and looked at things around me more keenly. A lot of what I did record is what we know well and stopping, observing and recording these images, opened up a whole new dimension that I would otherwise miss as I blinked in the car or walked past, too preoccupied to notice. 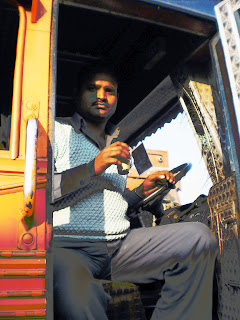 I found that these photographs, which later also included my friends and business meetings or tea at social outings as well as the truckers at the Hindustan petroleum depot in Bijwasan, the chai wala outside my building complex and the servants in my home, started creating a social panorama of sorts where the common denominator was how we made and drank tea: its cups or lack of them, its vessels and utensils and the spaces we made or drank tea in, that started defining the larger cultural and economic environment which I existed in. The contrast between chintz curtains and silver ware at the British High commissioner’s residence and the widow who sat on a ram shackled cart serving tea in plastic bags to labour working on construction sites in Palam Vihar, was telling. A story was emerging with evident socio-economic disparities, the implications of which I could not ignore. 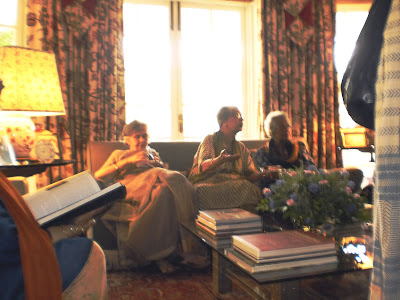 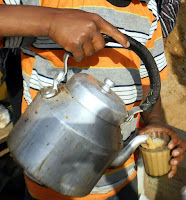 I did engage with everyone that I photographed. Some were shy, some got angry, some did not even notice. So pressed were they in catering to their custom they couldn’t care who came and did what, as long as they sold their tea. I became engrossed in the people and now notice them even as I sit in the car unable to ignore them like before. I began noticing little things: the way they sat, the way they dressed, the way they treated me, talked to me. How they opened up, so giving under a friendly gaze. Some were curious and also amused at my interest. For the most part they all wanted to tell their stories, where they came from, where they were taking the tea and more. Gradually, I became less and less inhibited in talking to them and a dialogue ensued that compelled me explore the national psyche which I believe mirrors my own.  I went back to Partition for it is an important turning point in making us the way we are today, in many unspoken ways. Needless to say, history is deeper than that, but somehow the events around Partition; its many unuttered stories and memories have created an internal neglect which many of us, if not all, have inherited. This to my mind has tremendous bearing on the external neglect that I was seeing and have recorded around me, in my daily excursions and rituals of living. And thus looking, I found myself change. 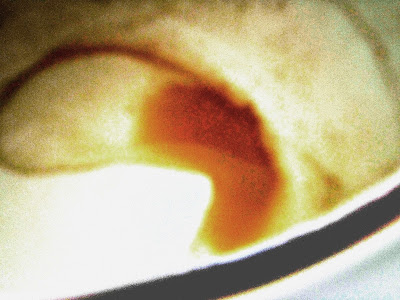