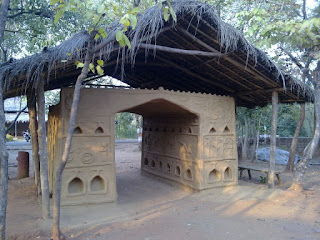 When I was asked to write about my day trip to Bhopal, I was grouchy as always about more work. I suppose my quasi-Bengali genes were acting up with their inherent laziness, although they also impart a creative bent. I was to learn in more than one way that every story has two sides indeed. With the first nip of winter and crust of clay, my whole view of ceramic art, its crafting technicality and the toil it entails  were about to change. It was to change my own way of thinking and working too.

The year began at Art Ichol in Madhya Pradesh, where I have been working as Ambica Beri’s managerial assistant, with our first symposium of 2015 which was an international rendezvous of ceramists and visual artists from various countries. We hosted Sandra Black from Australia, Cynthia Seigel from USA, Isabelle Roux from France, Eugenia Loginova and Anatolii Borodkin from Latvia and Anjani Khanna from Mumbai. Aditi Saraogi from Kolkata curated the residency.


Barely had everyone settled in, than they began to explore the ceramic centre and even get to work immediately. They all threw themselves at the potter’s wheel while discussing the kind of clay it was and a lot of stuff that I was clueless about. During the course of their stay and the symposium, I was to learn a lot. Their hard work was inspiring; in fact, it seemed like fun too! A whole new world of clay opened up for me as I watched them work. The symposium itself took place at Bharat Bhavan in Bhopal and was a big success. Once everyone had made presentations of their work and process, we  had the rest of the day off to ‘potter’ about the antediluvian city. There are many unguarded secrets to Bhopal, a city steeped in ancient cultural legacy, mixed faiths and serene lakes. I hope that, given the opportunity, every reader finds time to discover their own Bhojpal.


Whether it’s the windsurfers, open air-amphitheatre of Bharat Bhavan overlooking an almost Mediterranean vista or the canoeing competitions, Bhopal offers an unusual cityscape. The details are for you to find out. What I’d love to share with you is a beautiful folk tale about Kumbhars or potters. This tale is relevant to my trip to Bhopal, as not only was I accompanying several world-renowned ceramists during their residency in Maihar, I also knew next to little about ceramics, much less about our indigenous history regarding this craft.

Our art co-ordinator (a very able ceramist himself and Deputy Director of Bharat Bhavan) Mr. Devilal Patidar took us to the Museum of Man and the Tribal Museum. I must mention here that I was overwhelmed by both places. They are a great tribute to our country’s innumerable tribes and crafts. It made me proud of my country and its creative dexterity.


The Museum of Man is truly a comprehensive visual and tangible 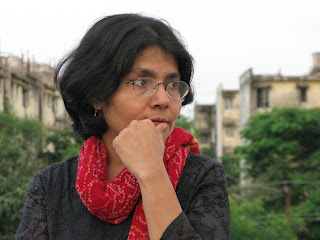 anthropological catalogue spread over two hundred acres of open land in the Shamla hills. It is solely dedicated to the various ethnicities and tribes of our country and the only museum in the world to have on-site prehistoric caves and paintings in reference to the Bhimbetka belt. Mrs. Shampa Shah (again a proficient ceramist) was our guide in the museum. Without her we would have been clueless. She has spent the last twenty years of her life in the study and formation of the Museum of Man. It was from her that we learnt of the interesting story I’m about to narrate.

It was depicted in clay on the walls of an installation. This installation was a display of various clay pots and plates, each intricately designed with tribal motifs. All our resident ceramists present were impressed by the craftsmanship. The designs had names such as ‘hair-pin’ owing to the inherent nature and story related to the patterns. The display installation itself had reliefs narrating the story and was made from a leepi of cowdung, rice husk and maati or mud. This was coated with chuna or lime and decorated with lovely little round mirrors.

The story goes thus: the eunuchs of India were once being persecuted by the king’s people. While fleeing, they came by a potter’s barn and decided to hide within the clay pots of his fire kiln. The potter warned them that they would burn to ashes if they hid there. The eunuchs however were adamant and felt it would be a better fate to be cremated alive rather than face such insult. Being so tired from his work, the potter then happened to fall asleep while the kiln was on. The eunuchs were inside, well concealed but in danger of being set ablaze. The potter meanwhile, in his dreams, was being told to wake up for his pots had turned to gold. The exhausted potter didn’t wake up. Again he dreamed of being told to awaken for his pots had scorched and turned to silver. But the potter tired from making the big pots that unbeknown to him now concealed refugees simply could not muster strength to rouse from slumber. Finally, the potter dreamed that his pots weren’t being baked well enough and he awoke with a start worried his work would be ruined. But, in fact, some of his pots truly hadn’t been fired. Miraculously, these were the pots that hid the eunuchs; their lives were spared. Had the potter not been so devoted to his work, the eunuchs would surely have been incinerated. Thus the story goes that every potter invariably finds that some of his pots haven’t baked well enough. And the kind of vigil the visiting ceramic artists were to enact upon our return to Maihar made this story come so alive for me, as I sat with them participating in all that they did to propitiate the kiln gods, and the exhausted anticipation when the firing was done. 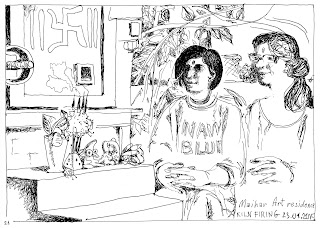 The fable also relates how humble yet hardworking the potter is. This I can vouch for, as during the residency with these ceramists, I noticed that they were so involved with their art that they’d even forget to eat. I was very inspired by all that I heard and saw at the Museum of Man and by Shampa too. Not to mention Mr. Patidar who apparently has a knack for finding rural and tribal artisans and making artists out of them - a man who discovers raw diamonds and in effect refines them. We also had the opportunity to meet a few of the potters who had worked at the Museum of Man for years. Shampa specifically mentioned how dedicated yet modest they were.

The Tribal Museum too was a visual delight, impressive beyond any words. The contemporary and minimalist external structure had been ingeniously masked from the inside with traditional and ethnic real-life installations. It carefully documented the sociological events, artefacts, rituals of the indigenous peoples of Madhya Pradesh. No attention to detail had been spared. After our tour, while having the best masala chai at the Tribal Museum, we met yet another Tribal artist. With her splendidly tattooed face , Bhuri Bai was delicate, intricate and beauteous like her work.
Once back in Maihar, everyone’s work had been removed from the bisque and glazing began. This was fun and new for all as the potters was working with new clay, new colours and no one knew what to expect. And after the history lesson in Bhopal, I was now going to see contemporary potters at their dedicated best. Glazing all done, the wood kiln was loaded up for the final firing. In keeping with tradition at the ceramics studio in Maihar, we had a little puja in front of the kiln and shared prasad. Anjani had made an exotic and weird owl of clay for a Kiln-God and Milan (studio assistant at Art Ichol) had made a little clay Ganesha to make offerings to. Anatolii did a wonderful drawing of Genia and Aditi sitting by the kiln with all the details like the Gods we made, the puja and the swastika on the kiln. Round the clock we kept watch of the kiln, stoking the fire, working hard, maintaining a log book and poking the wood in. Checking every now and then if all was in order, roasting potatoes in waste coals, buttering them and gobbling them up. We took turns for meals and some even delayed dinner to midnight. Exhausted after an eighteen-hour vigil, everyone was eager for the Kiln-Gods to reveal their secrets. Many artists were soot ridden and some even burnt here and there. But they were dedicated as ever until they collapsed into bed.

Though the whole trip had been a triumph, no victory was greater than the opening of the kiln. It was truly a moment, finding that almost all works had turned out perfectly and there was barely any damage. These potters successfully transformed clay through fire, making art in a small town in Central India and I had been a witness to it as if watching the birthing of clay gods.

I would have never penned this story if Gopika hadn’t pushed me to. It would have remained a whisper soon to be forgotten. Yet how relevant it was, given my scenario, and how wondrous! And as I wrote this story on an overnight train, first thing in the morning before reaching my destination, I discovered for the first time in my lazy 29 years how delightful it was to work early morning with a fresh mind. I’m glad I came, I’m glad I saw and I’m glad I unearthed the parable of clay.

Tanya Dutt is the Communications & Outreach Manager at Art Ichol. She co-ordinates activities at the centre and is currently working on a book she hopes to publish soon. She wrote her first poem about a cat at age 10 and since then discovered her penchant for the pen.

Posted by Gopika Nath at 21:49 7 comments: Links to this post