What a Chaotic day!
I was finding it difficult to sleep. It was not peaceful or reassuring when I turned off the light. My mind screeched in the darkness. So I switched it back on again and found that I was less afraid to let my thoughts tumble out. Tired, after a hectic day and an eight hundred metre swim, I was somehow still disturbed and restless. The first annoying factor had been an altercation I’d had with the condominium management.  In 42 degrees Celsius, the guard room did not have even a fan. The new manager cited protocol and all manner of excuses not to install one, callously stating that it was a holiday for his office the next day, so maybe two days hence, he could try and rectify the situation. God, this annoyed me. I shot off an email to the secretary of the society, but it meant the guards would have to endure another two days of inhuman conditions, at the very least. 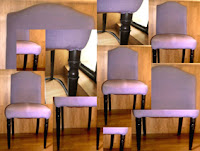 A lot of other things also happened during the day.  There was labour all over my apartment.  In the gruelling heat, they kept all the doors and windows opened, all through the day. I realise that they had to in order to repair them, but it was unbearably hot sitting indoors and worse outside. The rollers of most of the channels of the aluminium sliding doors and windows needed to be changed. Their locks had to be replaced and other minor adjustments made. It took the whole day, and to endure the hot and humid weather with drill machines and hammers banging away was tough. There had been no time to write in my journal as I usually did and this meant that things were not quite put into perspective at the start of the day.


I did complete sundry chores and respond to emails. I also managed some reading and then somehow did an hour of meditation in the heated cacophony but this only brought the underlying restlessness to the fore. I needed to write, but the moment I thought of getting out the laptop, something else needed attention. I was fasting, but this did not seem to quell the growing anxiety building up inside, either. A vigorous swim helped, but at the end of the day when I also had to switch rooms, as the air conditioner in my bedroom had stopped working because the erratic power supply that came and went every five minutes had blown something, it was the last straw.  I was grateful to have an alternate space to sleep in, but there was so much else playing on my mind. 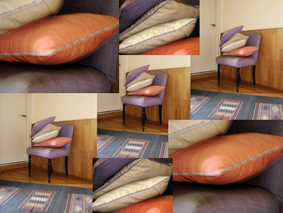 Unable to sleep, when I turned on the light, the first thing that caught my eye was the purple chair. Styled vaguely along the lines of furniture developed during and around the brief reign of Anne, Queen of Great Britain [1702 – 1714], this particular chair had once been part of a set of six dining table chairs. I remember it from those years when we lived in an apartment in Tivoli Court in Calcutta’s Ballygunge area in the 1960s and, also later, when we moved to Delhi, living in a rented bungalow in Maharani Bagh. This set, however, was replaced when we moved into our own home in neighbouring Friends Colony.  A new ornately carved set of six, also a variant of ‘The Queen Anne’ style, was made by Yasin in his workshop in East of Kailash. I remember my father would visit him often to check on the progress, sometimes taking me and my sisters along. Papa had chosen the design himself and wanted to ensure that Yasin and his associates did a good job of copying it from the foreign magazine he’d found the pattern in.


My mother used four of the old, now replaced set, to play Bridge with her friends and the two remaining chairs have stayed with me for well nigh thirty years; moving when I did, like faithful friends, from Delhi to Gurgaon. There was a time when I used to sit on them to work, drawing, writing and embroidering for many hours.  Now, these regal but old chairs grace my meditation room, which is where I slept last night. During meditation, I sit on one of them, with a cushion under my feet. They have, over the years, been upholstered in many different hues and fabrics.  At this point, they don a plain, cotton handloom textile which has a fine rib-like structure even though it is technically just a plain weave, dyed in a sort of lush lavender bordering on lilac, with a hint of purple. 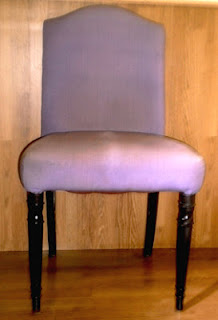 The front legs are round and narrow with a simple moulding of two circular parallel lines, at top and bottom. A narrow waist-like indent which creates an hour-glass figure between the two protruding lines of the upper set is one of the distinctive features of these otherwise non-descript chairs. The back legs are based on a square format. The base is about two inches, slowing increasing as it rises upwards carved in an  arch, curving in and then a little out, but not as far out, as the base of the foot. An upholstered high back with a slight slant arches back, slightly away from the seat of the chair. This is finished with a swoop on the top, like a wave coming from the left, rising at the centre of the back-rest and then vanishing on the right side. The effect is simple, yet quite regal. The legs are slender and polished in a dark shade of mahogany but most of the moulding and colour have been chewed into by the three black Labrador puppies that lived and grew up with us, leaving a rather mottled effect, revealing the raw sienna of the wood’s natural colour. 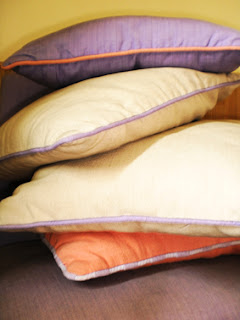 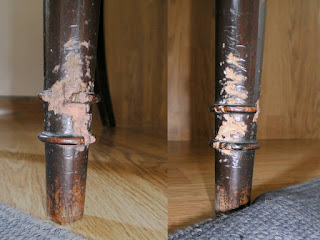 In my hurry to get the room set for slumber, I had picked up the cushions from the diwan and just dumped them on one of the chairs. The visual I saw, in those moments before I finally did fall sleep, despite the innocuousness of its mundane-everydayness, made a rather enchanting picture.  Carelessly piled, one upon the other, were four puffed up squares of peach, beige and lavender.  A rich peach with a slender, four-sided piping in a shade similar to the lilac of the chair, but in a chequered rib fabric, was the first to sit on it. Under fluorescent light, this lilac piping looked strangely blue; almost a sky blue. Piled on top of this were two in beige, squared off with a lavender line around their middles, a charismatic bulge spilling out on both sides. But one of the beige pillows was clearly more assertive than the other. It had managed to push the lower one awkwardly off centre while it sat above it, albeit slightly tilted too, but poised nonetheless. Above this, was another one of those soft and cuddly, comforting, swollen with poly-fill, sixteen inch squares, in the same colour and fabric as the chair, complemented by peach coloured piping. 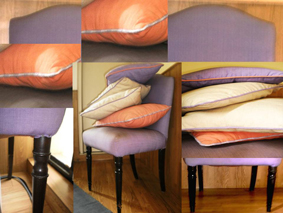 It made an appealing picture. I loved the way all the colours had come together. When I had planned the scheme for this room, I chose lilac because it is said to enhance concentration while meditating. Beige offset the blandness of a single colour scheme without distractions. But I decided to be a bit daring and added rich peach. Just one square cushion, to bring out the blues in the lavender and keep the beige warm, preventing a dirty, greyish influence seeping in via the lilac. Laxman, who upholstered the chair and made the cushions, did not approve. But I liked the peach; it added character without detracting from the intention of the lavender.  These colours had never looked as good together as they did that night. The ad hoc, careless way I had dumped them seemed oddly comforting. I marvelled at how it was all balanced, despite the lopsided arrangement and smiled. It had a touch of synchronicity: cushions vying for space by almost toppling each other off the chair eloquently reflected my state of mind. 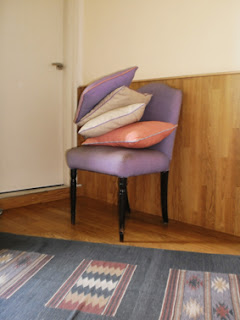 In that brief moment of quietude at the end of a hot, sweaty and chaotic day, as I looked at this visage, reminisced about the chair and observed the cushions rising oddly up its high-back, echoing the madness in my head, I found solace. What a day it had been: in addition to dealing with labour and callousness around me, I had also, inadvertently, been locked out in the veranda with Mahipal. The aluminium guy in showing off his workmanship by sliding the door shut with a flicker of his wrist, did not realise there was no one inside the apartment to let us back in. And by the time I realised what he was about to do, it was too late. The door latched shut with as satisfied a click as the smile on Islam’s face. Well, we were lucky, it was seven in the evening so we did not face gruelling heat and sunshine and Mahipal had fortuitously left the front door open, so Islam called his assistant who was waiting down below, on his mobile, and we got out soon enough. But then I had to make the rounds of three ATM’s before I could withdraw cash to pay him. A lot did get done. I even spent a couple of hours working on some embroidery later in the evening, but could not write and therefore sort my thoughts out.


However, when I finally turned off the lights, I had been oddly reassured by my ruminations around the purple chair and cushions. The more lopsided and random life is, the more there is to it. And given time, everything find’s its own place is the insight that finally allowed me to relax enough to fall asleep.
Posted by Gopika Nath at 16:18 2 comments: